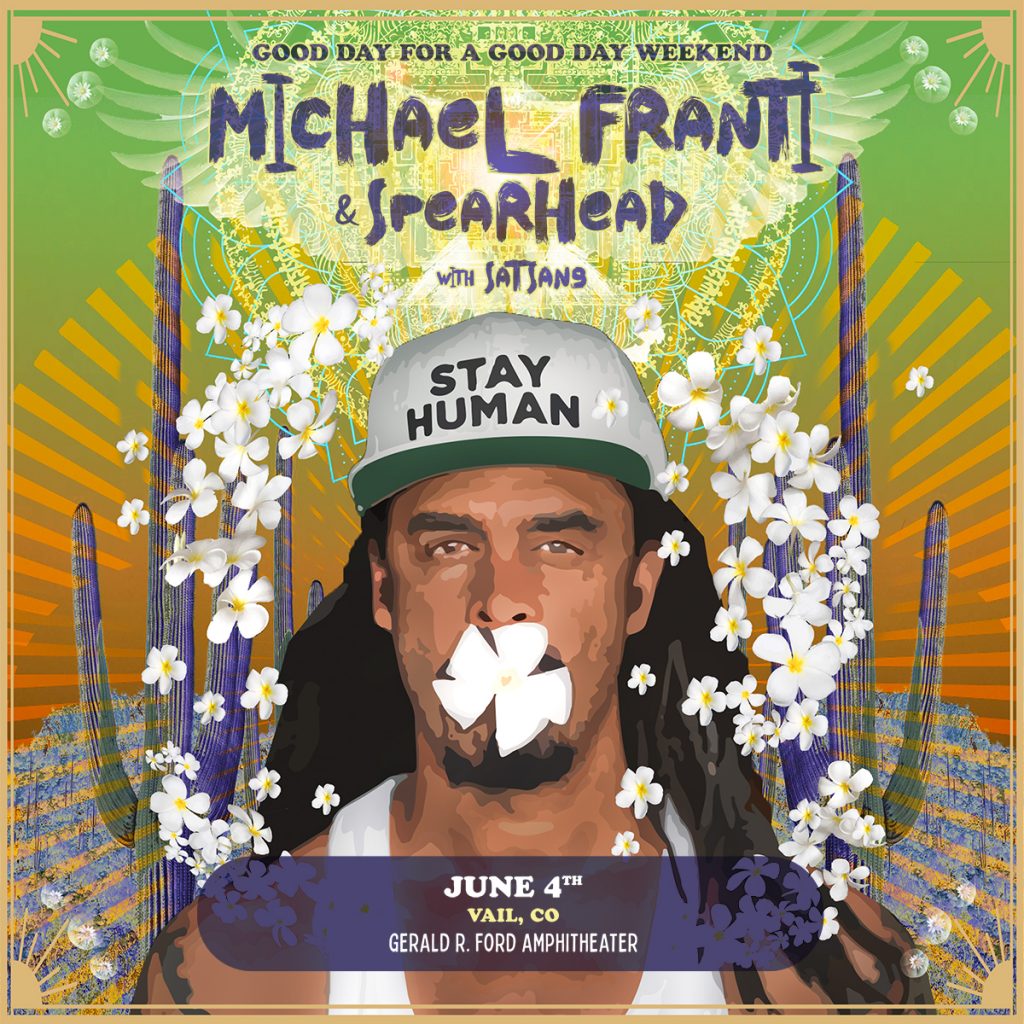 Michael Franti is a globally recognized musician, humanitarian, activist, and award-winning filmmaker revered for his high-energy live shows, inspiring music, devotion to health and wellness, worldwide philanthropic efforts and the power of optimism. Throughout his multi-decade career, Franti has earned three Billboard No. 1’s with triumphantly hopeful hits “Sound of Sunshine,” “Say Hey (I Love You)” and “I Got You,” as well as six Top 30 Hot AC singles, nine Top 25 AAA Singles and three Billboard Top 5 Rock Albums. “I Got You,” lead single from his latest album Work Hard And Be Nice, marked Franti’s first No. 1 in nearly 10 years and landed on NPR’s “Most Popular Songs of 2020,” while the music video boasts over 1 million views since its release. Michael Franti & Spearhead recorded the 17-song album in studios in Nashville, Los Angeles and San Francisco working with A-list writers and producers on what has been called their most diverse record yet.

In January 2019, Franti released his self-directed documentary Stay Human, which won an array of awards at film festivals worldwide and influenced his writing for his album Stay Human Vol. II (Thirty Tigers), which debuted at No. 1 on both the Americana and Independent Album charts and received critical acclaim from USA Today, Billboard, Associated Press and Paste. Influenced by the film, Franti’s Stay Human podcast presented by Gibson on the American Songwriter Podcast Network features creatives from all walks of life, with new episodes available each week. Deemed a “groundbreaking musician” by Entrepreneur, Franti launched a virtual event revolution in June 2020 with his Stay At Home Concert World Tour, a creation prompted by his first summer in 33 years in which he wasn’t on the road due to the global pandemic, performing for over 50,000 fans worldwide with seven uniquely themed virtual livestreams. In order to better connect with his Soulrocker community, Franti developed a dual-screen model, allowing fans to join a “Backstage Zoom Party Room” and interact directly with one another. Michael Franti & Spearhead continue to foster their community both on and off stage with a wish granting non-profit, Do It For The Love, founded by Franti and his wife, Sara. Do It For The Love brings those with life threatening illnesses, veterans, and children with severe challenges to concerts worldwide, fulfilling over 3,300 wishes and touching the lives of over 12,000 people to date. Franti also owns SOULSHINE Bali (where he and his family have resided since February 2020), a 32-room top-rated yoga retreat hotel located in Ubud, Bali.