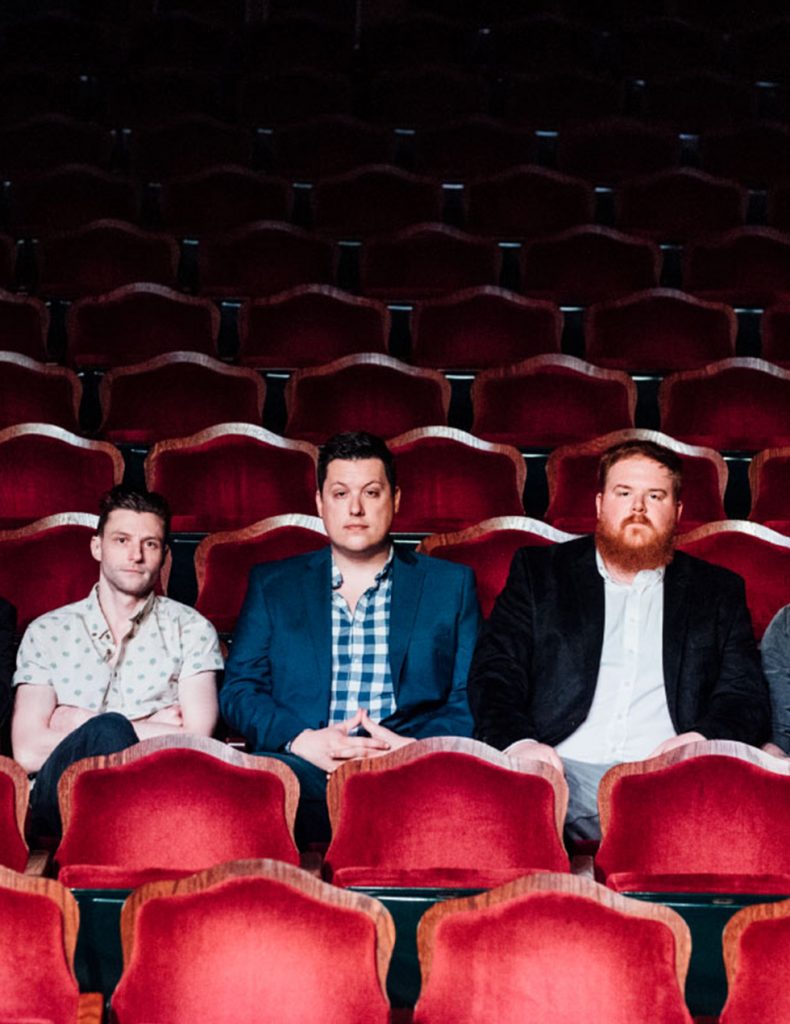 Life constantly changes. It seesaws between hardship and triumph, loss and satisfaction, and heartbreak and love. No matter how much everything fluctuates, community flourishes at the center of existence. It binds and unites all of us. Music stitches together a strong community around The Ghost of Paul Revere. The Maine trio—Max Davis [vocals, banjo], Sean McCarthy [vocals, bass], and Griffin Sherry [vocals, guitar]—examine life’s ebbs and flows through a distinct and dynamic distillation of folk, bluegrass, rock, and alternative on their third full-length album, Good At Losing Everything.

In doing so, the band invites listeners to empathize as they holler along.

“Over the past few years, we’ve collectively endured many significant changes,” says Griffin. “When you’re writing music, it naturally morphs into what you’re doing. We were going through the same things without necessarily acknowledging it out loud, but the music writes itself along with life.”

“We always just wanted to be strong community members who create an excuse for people to come together, process, and share emotions,” agrees Max. “Those individuals who have supported us are growing all of the time. Our audience has given us a degree of freedom to grow. It’s liberating, because we’ve been able to take risks and evolve each time we go into the studio.”

Since forming in 2011, the band has created a following that has propelled them from a local to a national level, tallying 15 million total independent streams to date. After releasing the EP North in 2012, their signature style gradually progressed over the course of two full-length albums—Believe [2014] and Monarch [2017]—and a pair of EPs—Field Notes, Vol. 1 [2015] and Field Notes, Vol. 2 [2019]. They also garnered acclaim from the likes of Billboard, Boston Globe, AXS, No Depression, Relix, and The Boot, who appropriately dubbed them, “not quite bluegrass, not quite country, not quite rock ‘n’ roll, but kind of all three combined.” Along the way, the band has performed alongside The Avett Brothers, Jason Isbell, The Revivalists, Bela Fleck, and The Infamous Stringdusters, sold out countless headlining gigs, and appeared at major festivals nationwide such as Newport Folk, Austin City Limits, WinterWonderGrass, BottleRock Napa, Shaky Knees, Okeechobee, and Voodoo Music + Arts Experience. The boys also took home “Best in Maine” at the New England Music Awards twice, in 2015 and 2019. In 2019, their song, “Ballad Of The 20th Maine”, became the official State Ballad of Maine after being passed unanimously by the Senate and House of Representatives and signed into law by Maine’s Governor, Janet Mills.

In 2014, they also began curating, booking, and hosting their very own festival, Ghostland. Rooted in a love for Maine’s music community, the festival has grown into one of the state’s largest festivals, drawing both local and national talent to the annual Labor Day Weekend event.

Throughout 2019, they worked on what would become Good At Losing Everything. While it would be their third record with engineer and producer Jonathan Wyman, it would be their first collaboration with friend, producer, and co-writer Spencer Albee. They also welcomed new members, drummer Chuck Gagne and instrumentalist Jackson Kincheloe, as well as pianist Ben Cosgrove, into the fold to record.

They demoed initial ideas at Albee’s home studio before moving into a local venue for a month. There, the band continuously played the new songs together on stage until each felt finished. By the time they entered the studio, they were firing on all cylinders.

“It was the first time we worked with a producer as we were writing a record,” Sean states. “Since Spencer comes from a different background, he stretched our abilities to places we might’ve been uncomfortable to go to on our own. He gave us a much-needed outside perspective.”

“He’s an amazing songwriter with an incredible pop sensibility,” adds Max. “He was really helpful with fortifying the structure,  so the music flows.”

Thematically, the songs directly addressed a myriad of emotions. Among many trials and tribulations, the passing of a close mutual friend weighed heavy on the musicians as they crafted Good At Losing Everything.

“A big part of this album is dealing with personal loss and moving forward,” admits Sean. “We lost our good buddy, Taylor, to cancer. Simultaneously, we were dealing with professional stresses and each going through our own difficulties.”

The first single, “Love At Your Convenience”, illuminates the group’s progression. Fueled by shimmering piano, sweeping guitar, and uplifting harmonies, it takes off on a soaring and soulful chant—“My love ain’t here for your convenience, if the grass is greener, then be done with us”—punctuated by unrestrained rock ambition.

Meanwhile, the opener and title track “Good At Losing Everything” slips from strains of gospel choir and handclaps into rustling guitar, a steady beat, and hummable harmonica. A heartfelt dedication to Taylor, they dispense some hard-earned knowledge: “If there’s one thing I’ve learned about life, my friend, you get good at losing everything.”

“As Taylor was fighting his battle, I was having very vivid dreams about his passing,” Griffin confesses. “I wrote about what it would be like to go to a friend’s funeral and how I needed to start coping with the feeling before I was in the situation.”

Originally composed on an old Casio keyboard, “Two-Hundred and Twenty-Six Days” hinges on warm reverb and an airy buzz as it blossoms into an “upbeat rhythm with somber lyrics,” according to Max. Then, there’s “Loneliness.” Stark vocals paint a vivid picture of “coping with depression when you’re living on your own,” as Griffin puts it.

Expanding the sonic palette, The Ghost of Paul Revere infuse string sections, looping, and mellotron into immersive interludes such as “28:27” and the outro “We Were Born Wild.”

“I started to experiment with looping and reversing tracks while on the road,” remarks Griffin. “I found elements already in our songs that melted together and created a landscape. We had never tried anything like that on a record before.”

“We began with just acoustic instruments and made this style we called, ‘Holler Folk’,” Sean adds. “Now, we’re taking chances and doing things we wouldn’t have done six years ago. We’re hungry to create new things and challenge what we can do together.”

In the end, The Ghost of Paul Revere open up both thematically and musically on Good At Losing Everything. Through widening the creative palette, the sound expands and attracts an even bigger community, while bringing the inner circle closer than ever.

“We want to give listeners a whole experience,” Max leaves off. “Hopefully, they find a little comfort in reflecting on their own lives when they hear us.”